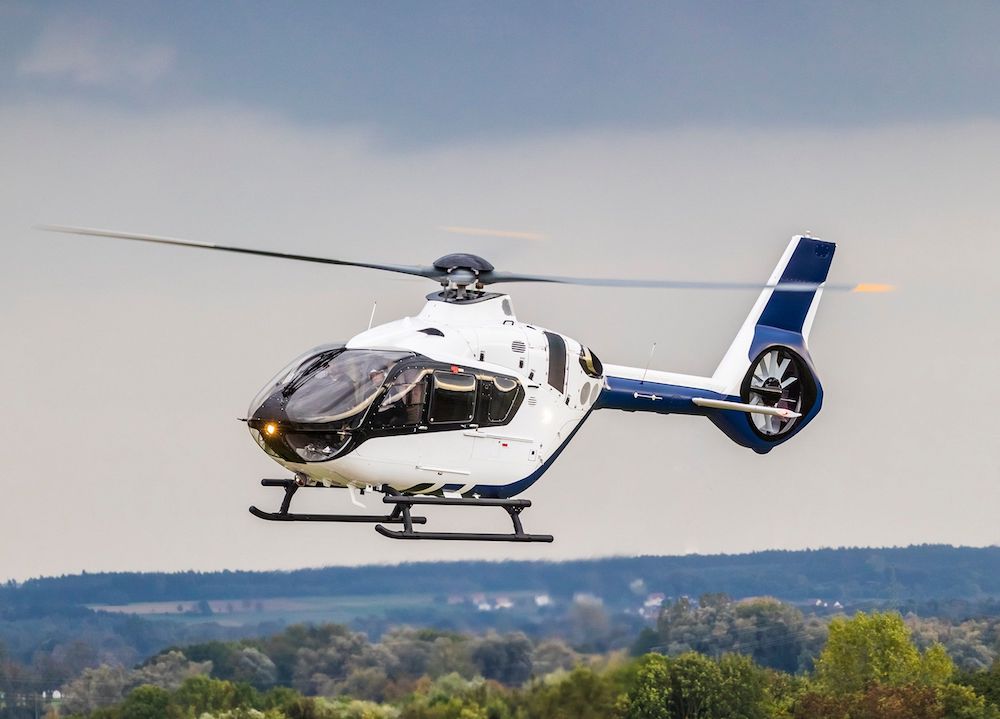 The H135 is a twin-engine “light”helicopter.

The H135 has a wide geographic footprint (over 60 countries) and pool of operators (over 295). The fleet has accumulated over 5.4 million flying hours.

The helicopter’s primary role is in EMS and law enforcement, particularly in Europe and North America. About half of the current H135 fleet are in the EMS sector and approximately 16% operate in law enforcement and other public sector roles.

The H135 has also has successful secondary roles in VIP/Utility and offshore O&G.

The grandfather of the H135 is the Bo105, the world’s first light twin-engine helicopter. The Bo105 represented a major step forward in helicopter design, its hingeless rotor head and twin engines made helicopter capable of delivering the exceptional performance needed for a low-level anti-tank platform in the European sector.

In the 1990s the Bo105 design was revised to include a Fenestron tail rotor system, a further development of the rigid main rotor system and FADAC engine controls. This redesign was originally the Bo108 but was renamed the EC135 after the merger of Messerschmitt-Bölkow-Blohmand Deutsche Aerospace AG to form the Eurocopter Company.

The EC135 was developed with two engine options, the Turbomeca Arrius 2B and the Pratt & Whitney Canada (PWC) PW206B. The variants of the 135 are categorised by the type of engine installed with the “P” denoting PWC engines and the “T” for Turbomeca (now Safran) engines.

Over the years the H135 has been upgraded with more powerful engines, more advanced avionics (now Helionix) and a dual FMS. The variants are summarised below:

The “H” indicates the installation of Helionix avionics.

Work is underway to increase the MTOW to 3,100kg.

The H135 has a strong safety record considering the fleet total of over 5,400,000 flying hours.

There have been about 30 major incidents involving H135s. The following is a summary of the few incidents which relate to maintenance or design issues:

In 2007 a EC135T2 operating in Japan with All Nippon Helicopter suffered a fatal accident due to fracture of the tail rotor control rod. This accident prompted Airbus to update the inspection procedures for the tail rotor system.

The latest models of the H135 are in production - the H135P3H and H135T3H. H135 production is centred at the Airbus Helicopters facility in Donauwörth, Germany. A production facility for the H135 was also opened in 2019 in Qingdao, China (first production in October 2020).

EMS is central to the future of the H135. About half the fleet are deployed into this sector.

EMS helicopter services are now seen as part of the infrastructure of a modern state and demand is growing worldwide, even in sub-Saharan Africa. EMS helicopters in developing countries are additionally desirable due to the independence from local infrastructure.

The fundamentals of EMS generally require a helicopter of at least the size of the H135. Medical equipment must be carried together with 2-3 medical professionals. Upcoming electric flight vertical lift platforms can’t handle the weight required for EMS operations. Therefore, this role will have to rely on the turboshaft engine for the foreseeable future. There is no “new technology” on the horizon that would make it worthwhile to replace current-technology helicopters in the EMS role.

The H135 has proved very well suited to the EMS role. The H135s combination of the flat cabin floor, rear clamshell doors and the high tail rotor Fenestron all facilitate the rear loading of passengers into the aircraft, which is much more convenient than loading via the side door of the helicopter.

The H135 has limited direct competition in the EMS role. The Bell 429 was designed as a competitor but has not yet achieved the same market penetration. The AW169 has been accepted as an EMS platform, but is larger than the H135 and competes more directly with the H145.

A trend has developed in European EMS operations towards the larger H145 and AW169. This is evident in new helicopter production – in 2019 H145 production was more than double H135 production. The driver is the larger cabin which enables more medical equipment and personnel to be carried. But there is a limit to this. Larger helicopters are more expensive to operate and require a larger landing area. For many EMS operations the H135 will remain the most suitable helicopter.

About 1/5 of H135s are deployed into the law enforcement role.

Aerial surveillance will form an important part of law enforcement activities for the foreseeable future. However, drone technology could be a game changer in this sector. Why put a police officer up in a helicopter to monitor an area when a drone can provide the same functionality at a fraction of the price and for a much longer duration?

However, because the H135’s role in law enforcement is only secondary and the drone replacement will not be overnight or wholescale, the impact is minimal on the future of the H135.

The H135 looks likely to have a long operational future, resting primarily on a sustained requirement for EMS and (to a lesser extent) law enforcement services.

The H135 is starting to develop a role in supporting offshore wind farms which could develop into a sizeable market. Larger helicopters are not required or suitable for this work, which usually involves the delivery of a single maintenance expert onto a wind turbine for a short period.

H135 running costs are reported to be lower than other comparable helicopters.

The rental price for a H135 is in the range of US$15K to US$60K per month. The wide range of these values is primarily a reflection of the differences between the variants.

The H135 is frequently traded. In 2019 about 19 deals occurred in the secondary market, with most of the trades being in newer models less than seven years old. This makes the H135 the third most liquid commercial helicopter. AeroAsset reports that trading values fall into a wide range of between US$1m and US$4m reflecting the variety of H135 variants on the market. Average trading values in 2019 rose by 20% when compared to 2018 values. [1]

The values of H135 do not follow a linear trajectory based on age of manufacturer. Instead, the older variants experience a sharper reduction in value as the market prefers the later variants.

The primary maintenance events on the H135 are as follows:

The engine overhaul interval is 4,000 hours.

The HCare product can be modified to cover different lists of components.

The “Lite” programs do not include coverage for life limited parts. The Gold product includes coverage for freight costs and attendance of a mobile repair team for an unscheduled AOG. The “Platinum”program offers technical publications subscription, scheduled line maintenance (parts & labor) in addition to the Gold program coverage.

The “Classic” is the standard product. The“5 Star” provides enhanced technical support and is intended for use by less experienced operators.

The Airbus Helicopters home page for the H135:

The Wikipedia page for the H135:

An article regarding cost reduction programs impacting on the H135.

A listing of H135 accidents and incidents