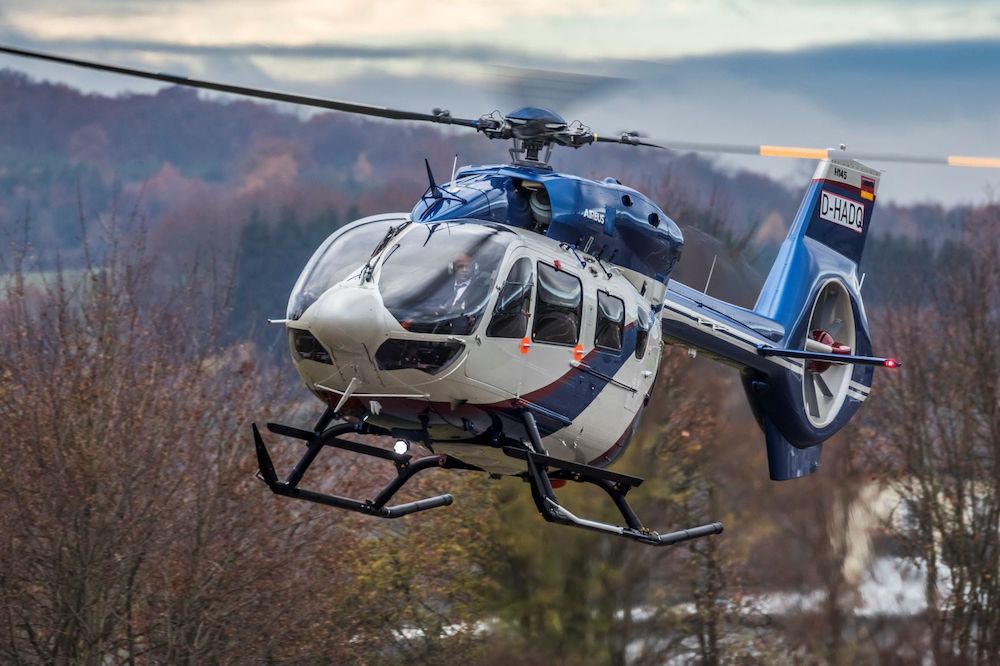 The H145 is a twin-engine “light” helicopter.

The H145 has a wide geographic footprint (over 60 countries) and pool of operators (over 300). The fleet has accumulated over 6 million flying hours.

The helicopter’s primary roles are in EMS and Law Enforcement particularly in Europe and North America. About 50% of the current civil H145 fleet are in the EMS sector and 20% in Law Enforcement.

The H145 has also has secondary roles in VIP, Utility, Offshore and Wind Farm Support.

Military versions of the H145 are designated the H145M or the UH-72A Lakota that is manufactured for the US Army. The military versions are outside the scope of this Asset Summary.

The H145 is the Airbus Helicopters marketing designation for the latest variants of the long-running BK117 series of helicopters.

The BK117 was originally developed and manufactured jointly between Messerscmitt-Bölkow-Blohm (MBB) of Germany and Kawasaki of Japan. The BK117 partnership was signed in 1977 and the aircraft was certified in 1982. Production lines were established in both Germany and Japan. MBB was later purchased by Daimler-Benz and subsequently became part of Eurocopter which itself was later rebranded as Airbus Helicopters.

The earlier model BK117A and B series aircraft were powered with the Honeywell LTS101-650 and -750 engines whilst the BK117C series were powered by the Safran Arriel 1E2. These are not be considered “EC145/H145” helicopters for the purpose of this Asset Summary.

The BK117C-2 was introduced in 2000 featuring a larger cabin, composite main rotor blades. The EC145 provided greater payload with reduced vibration and noise levels. This is the first variant of the BK117 to receive the “145” designation (the EC145).

The C-2e version was developed as a utility version featuring a Garmin G500H digital cockpit and without items like AFCS to make it lighter for the utility market.

In 2014 the H145 (BK117D-2) was introduced. The D-2 featured the more powerful Safran Arriel 2E engines along with a (Fenestron) shrouded tail rotor system and Helionix avionics system. The Helionix offers a fully digital integrated cockpit systems including 4 axis autopilot.

In 2020 the H145 (BK117D-3) was introduced. The D3 features a five blade main rotor head with Blue Edge blades offering an increase in payload along with reductions in the vibration and noise levels.

The H145 has a strong safety record considering the fleet total of over 6,000,000 flying hours.

There have been about 90 major incidents involving BK117s and H145s and the vast majority of them did not relate to maintenance or design issues.

In January 1989 a BK117A-1 was destroyed by a fuel tank fire after landing. Following this incident an AD was issued to check the fuel system components for correct bonding.

In July 1999 a BK117B-2 on approach to land the main rotor broke up causing a fatal crash. The accident was caused due to failure of the Tension-Torsion strap (T-T strap) due to fatigue cracking. Subsequent to the accident a life limit was imposed on the T-T straps by the manufacturer.

In December 2005 a BK117B-2 encountered severe in-flight turbulence and the pilot encountered reduced control of the helicopter. The investigation revealed that  the published procedure for setting autorotation rotor RPM in the maintenance manual did not include settings for aircraft operations at high gross weight, and that the application of that procedure in the incident helicopter had resulted in an inappropriately high collective pitch setting.

The latest model of the H145 in production is the D-3. H145 production is centred at the Airbus Helicopters facility in Donauwörth, Germany.

57 H145s were produced in 2019 and 53 aircraft in 2020 (including the first 3 D3 versions). These are very high production numbers and look likely to continue into 2021. There is a question as to whether this level of production will at some point over-saturate the market.

EMS is central to the future of the H145 with about 50% of the civil fleet deployed into this sector.

EMS helicopter services are now seen as part of the infrastructure of a modern state and demand is growing worldwide, even in sub-Saharan Africa. EMS helicopters in developing countries are additionally desirable due to the independence from local infrastructure.

The fundamentals of EMS generally require a helicopter in the size category of the H145. Medical equipment must be carried together with 2-3 medical professionals. Upcoming electric flight vertical lift platforms can’t handle the weight required forEMS operations. Therefore, this role will have to rely on the turboshaft engine for the foreseeable future. There is no “new technology” on the horizon that would make it worthwhile to replace current-technology helicopters in the EMS role.

The H145 has proved very well suited to the EMS role. The H145s combination of the rear clamshell doors and the shrouded tail rotor (Fenestron) enable the rear loading of passengers into the aircraft, which is much more convenient than loading via the side door of the helicopter.

A trend has developed in European EMS operations away from the H135 and towards the H145 and AW169. The driver is the larger cabin which enables more medical equipment and personnel to be carried. This has resulted in the H145 being the most in-demand civil helicopter for the last few years, with a long order backlog and few available units for sale. There is however a limit to this trend. Larger helicopters are more expensive to operate and require a larger landing area.

About 20% of the H145 fleet is deployed into the law enforcement role.

Aerial surveillance will form an important part of law enforcement activities for the foreseeable future. However, drone technology could be a game changer in this sector. Why put a police officer up in a helicopter to monitor an area when a drone can provide the same functionality at a fraction of the price and for a much longer duration?

However, because the H145’s role in law enforcement is only secondary and the drone replacement will not be overnight or wholescale, the impact is minimal on the future of the H145.

The H145 has a historically small footprint (only about 30 helicopters) in supporting oil and gas production. However, more recently H145s are being increasing deployed to support the maintenance and construction of offshore windfarms. This sector has been growing over the last few years and seems set to continue its growth as electricity supplies move to more renewable sources worldwide. This will be positive for H145 demand.

The H145 looks likely to have a long operational future, resting primarily on a sustained requirement for EMS and (to a lesser extent) law enforcement services.

The H145 is starting to develop a role in supporting offshore wind farms which could develop into a sizeable market. Larger helicopters are not required or suitable for this work, which usually involves the delivery of a single maintenance expert onto a wind turbine for a short period.

H145 running costs are reported to be comparable with other helicopters of similar size.

The rental price for a H145 is in the range of US$70K to US$100K per month. The wide range of these values is primarily a reflection of the differences between the variants.

The primary maintenance events on the H145 are as follows:

The engine overhaul interval is 5,000 hours.

The H Care support can be modified to cover a defined list of components.

The Airbus Helicopters home page for the H145:

The Wikipedia page for the H145:

A briefing on the H145 from a VIP angle by Business Air News: https://www.businessairnews.com/hb_aircraftpage.html?recnum=EC145

A H145 lands on top of the Aconcagua, the highest mountain in the Southern Hemisphere (2019)