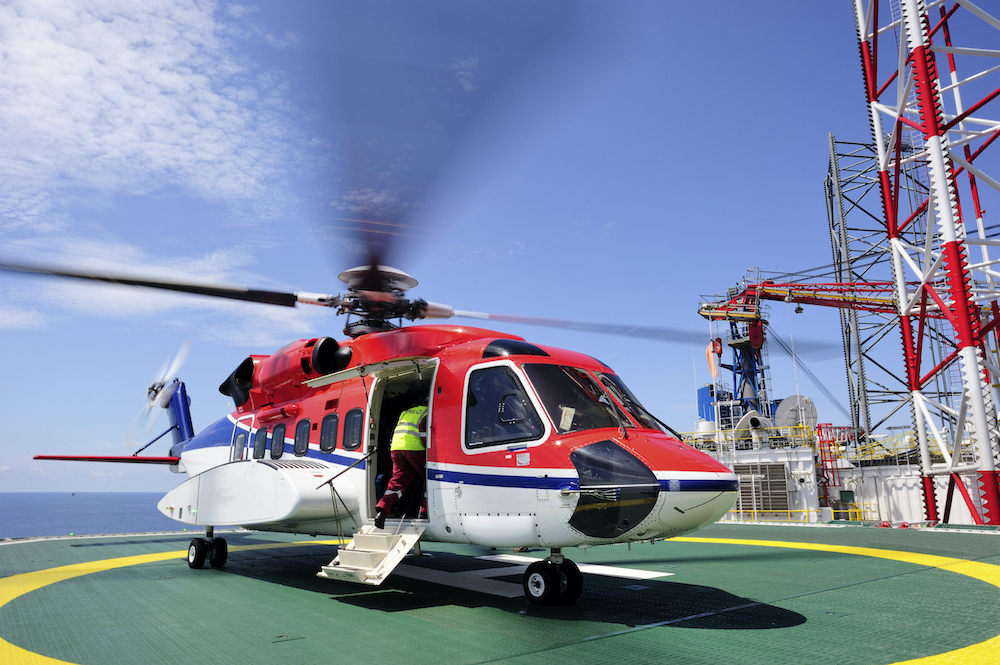 The S-92 is a twin-engine “heavy” helicopter.

The aircraft primarily provides crew transportation for the offshore oil and gas industry and operates as a long-range search-and-rescue platform.

The type is also well established in VVIP transportation and has seen some deployment for logistical support in conflict-zones and in response to natural disasters.

The genesis of the aircraft was the 1973 oil crisis which quadrupled oil prices and created the impetus for the offshore oil and gas industry.

In the 1970s and 1980s the long-range helicopters were military transport helicopters from three manufacturers - the Boeing BV234LR Chinook (Boeing), the Sikorsky S-61 and the Aérospatiale (later Airbus) AS332 (a variant of the AS330 Puma).

The Chinook was particularly unsatisfactory both in terms of efficiency (the aircraft has a capacity of up to 44 passengers and three crew which exceeded requirements) and safety (particularly the 1986 crash in the Shetlands). The S-61 and AS332L were more popular, but rapidly developing technology offered room for improvement in running costs, power and performance.

Boeing exited the civil helicopter market - eventually selling the civil type certificate of the Chinook to Columbia. Aérospatiale (later Airbus) developed the AS332 into the L1, the L2 and subsequently the H225.

Sikorsky took a different approach. The S-61 was considered too complex to update with new engines, a new gearbox, electrical hydraulics and a glass cockpit [1]. Instead, the design basis for the S-92 was the successful S-70 / UH-60 (which remains in service today and is popularly known as the “Black Hawk”, “Sea Hawk”and “Fire Hawk”). The S-92 uses proven gearboxes and engines from the S-70 attached to a new cockpit and cabin.

The S-92 was certified in 1992 (hence “92”). From its first commercial deployment in 2004 the S-92 was in high demand and continuous production. Demand came from the offshore oil fields in the North Sea and Canada (and later Brazil and Australia) and from the commercialisation of search-and-rescue services in the UK and Ireland. The S-92s’ direct competitor was the Airbus H225, the only Western helicopter with a similar range and passenger capacity. During these boom years there was sufficient space in the market for both types.

In 2014 oil and gas prices plummeted. This had dramatic implications for the offshore helicopter industry as existing production was scaled back, new exploration was curtailed, and oil and gas companies pressured helicopter operators to reduce costs. At the same time two indirect competitors came onto the market – the “super-medium” helicopters (AW189 and H175). S-92 orders dried up and production effectively ceased.

Since 2015 the availability of S-92s has outstripped demand resulting in some S-92s ceasing operation and entering storage. By Q2 2020 approximately 40 S-92s were inactive and this number is likely to increase as S-92s are returned to leasing companies at lease expiry.

The fall in S-92 demand would have been even steeper had it not been for the complete removal of the H225 helicopter from the North Sea sector after the crash of a H225 in Norway in 2016. This disaster left the S-92 as the only helicopter with the range to reach certain platforms in the North Sea and Brazil with a full cabin.

In 2014 the S-92 (a military variant - the VH-92) was selected as the replacement helicopter for the President of the United States (Marine One). This means that the type will continue to be actively developed and supported by Sikorsky for the foreseeable future. This may have some cross-over benefits for the civilian sector.

The S-92 has an impressive safety record. The most notable accidents have been:

Demand for the S-92B is unlikely to be strong and the commercial S-92 fleet will not expand through new production much beyond the existing fleet.

Oil and gas support missions will always represent the majority of demand for the S-92.

Lobo expects overall demand from the offshore oil and gas industry for helicopter services to be fairly static for the next 5-10 years and to then experience a gradual but permanent decline. Demand will gravitate towards Latin America and longer-range mission requirements which favour the S-92.

The question is whether this long-range mission demand will be fulfilled by the S-92 or by one of the two super-mediums. All three aircraft are technically capable, so the question will come down to cost. The S-92 has more expensive operating costs (see below) but could still compete with the super-mediums if its capital cost (i.e. sale value or lease pricing) was significantly below the super-mediums.

In Q3 2020 a Petrobras tender process in Brazil involved competition between a S-92 and H175 solution and the result was favourable to the H175.

The other existing sources of demand for the aircraft are important to consider but will likely make little difference to the overall future of the S-92.

The potential for a utility role

Can older S-92s have a future in utility?[2]This is a regularly debated issue. Similar helicopters such as the Chinook, S-61, the AS332 and the H225 have all transitioned very well into utility roles.

Two S-92s have previously operated in Afghanistan in a utility role in 2011 to 2014. But this is the only example of a sustained S-92 utility operation.

For the S-92 to have a strong future in utility operations the existing external load limitations need to be relaxed and the airframe limit addressed (see “Maintenance” for more details) through testing and engagement with regulators. This development requires significant investment from the type certificate holder.

It is questionable whether Sikorsky will make this investment (especially under Lockheed ownership who are not civil-market focused). The investment would not lead directly to sales of new S-92s but would benefit Sikorsky by increasing parts sale opportunities and improving the residual value prospects of the type (thus possibly encouraging purchases of new S-92s).

If the S-92A type certificate was sold (a common transaction type in the helicopter market) perhaps the investment might be more justifiable for the new owner. Milestone is an obvious possible purchaser of the type certificate.

Any maintenance-related accident for either a super-medium or the S-92 would have a huge impact on the affected helicopter and its competitors. As per the H225 in 2016, such an accident has the capacity to change the marketplace overnight.

The future of the S-92 is intrinsically linked to super-medium capital costs. To maintain commercial viability, the S-92 must sustain a lower capital cost than the super-mediums in order to mitigate its higher running costs.

Lobo’s view is that the market lease pricing for a S-92 is in the range of US$80K to US$120K per month. The appropriate rate depends on factors such as age, location, specification, lease term and operator credit. These lease rates are comparable with a H175 or AW189 but the S-92 offers a greater seating capability.

The asset value for any commercial helicopter should align with its market lease rate. The lease rates estimate above imply values in the range of US$7-10m (on the basis of 1.2% LRF) and we consider this to be an appropriate asset value range estimate. Acquisitions of S-92s by Milestone in Q1 / Q2 2020 have been reported in the US$6-8m range but these are generally considered “distressed” sales.

Maintenance on the S-92 is mainly hourly driven.

The primary maintenance event is the 1,500 hour check with two compliance methods:

Calendar inspections are limited to certain sub-systems such as the floats, life raft, driveshaft bearings and air data systems. These generally fall due at either 12 months or 24 months. There are some undercarriage component inspections controlled by number of landings.

The GE CT7-8A engines have scheduled inspections at 375 hours, 750 hours and 1,500 hours. There is also a hot section inspection controlled by cycles and various cycle-limited parts with lives ranging from 2,400 to 60,000 cycles.

The S-92 is unusual in having a maximum airframe life of 30,000 hours. A few S-92s are starting to approach this limit which raises the question of if and how the airframe life can be extended.

The S-92 has a maximum external load limit of 8,000lbs (3,629kg) and the repetition of external lifts (REL) of this nature is heavily restricted. A somewhat less restrictive but complex regime applies to REL for loads below 4,000lbs (1,814kg).

Together, these lift restrictions present challenges for transitioning the S-92 into a general utility or firefighting role as they compare unfavourably with competing aircraft.

The primary providers of “power by the hour” (PBH) solutions on the S-92 are:

The TAP solution is primarily intended for medium to high utilisation offshore work. Heli-One also provide a PBH solution, but exclusively for their parent company CHC.

The Wikipedia page for the S-92:

A report on a serious aviation incident involving a S-92 in Norway in September2020.

An interview with Con Barber of Macquarie with comments regarding S-92 values.

An interview with Brad Sheen with comments regarding S-92 values.

A press release regarding the May 2020 crash of the Canadian CH-148 Cyclone.

An interview with Ed Washecka regarding S-92 market values and lease pricing.

An article written by Adam Schierholz regarding the S-92 in the South American market.

A press release from Sikorsky regarding the A+ and B modifications.